Our camps are located on Moss Island, which is one of the many islands found off the mouth of the Nipigon River and what used to be a river delta 1000s of years ago.

The whole area is world famous for having the best Brook Trout fishing on the planet. The world record was caught back in 1915 just a few miles from our camps. The famous Dr. Cook Brook Trout was caught in the river but that was a bit of a fluke. There is not enough food in the river to support the massive populations of trophy Coaster Brook Trout in the area. Most of the biggest Brook Trout can be found close to shore and swimming around the islands feeding on Lake Herring, Shad and Cisco. The big Coasters do go up into the river once in a while but generally the river produces smaller but perfect eating size Brook Trout. We do guide guests up the Nipigon River if requested.

Brook Trout up to four pounds are common. On occasion guests do catch Brook Trout in the 5 or 6 pound range and on rare occasions a 7-pounder might get caught. This is changing. Every year fishing guests are noticing that the average size Brook Trout seems a little bigger. There is a good explanation for this. Back in the 1930s a pulp & paper mill on the river destroyed the Brook Trout population. Before this injustice 10 pound Coaster Brook Trout were common. In actual fact, Dr. Cook’s record trout did not get weighed until several days after he caught it. It was way more than 14.5 pounds and some speculate it was over 20 pounds when first caught. The genetic strain of Brook Trout caught in our waters may produce a 20-pounder some day.

Through conservations efforts back in the 70s and 80s by the town of Nipigon and local fishing groups; specimens were captured and bred in captivity. In the 1980s the captivity-bred Brookies were released back into Lake Superior and since then the Coaster Brook Trout have made a huge comeback. Today we are fishing for the direct descendants of those giant Brookies. They have the same genetic makeup to grow big like the unbelievable monster Brook Trout or yester years. 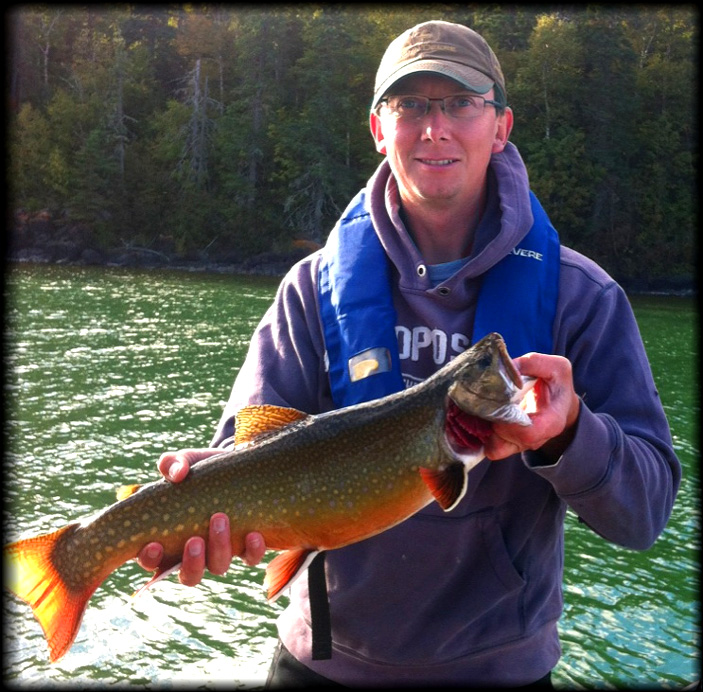 The amount of Brook Trout you catch in a day is impossible to say. If you put minimal effort into it and just troll straight behind the boat you should catch a couple nice trout per day. The Brook Trout tend to move to the sides when a boat trolls through so if you cast out behind the boat at a 45 degree angle and let the boat pull the line straight and keep repeating that you will double the amount of trout you will catch. This method is especially good in the summer because it lets your lure sink deeper than normal. In the heat of the summer the Brook Trout may be as deep as 35 feet so trolling with deep running lures or back-trolling with a 3-way swivel will bring them in.

We have had guests catch 6 big Brook Trout in a day. Just make sure you tell us you want to target Brookies and we will make sure you are using the right techniques at the right depth for the time of year of your fishing vacation.